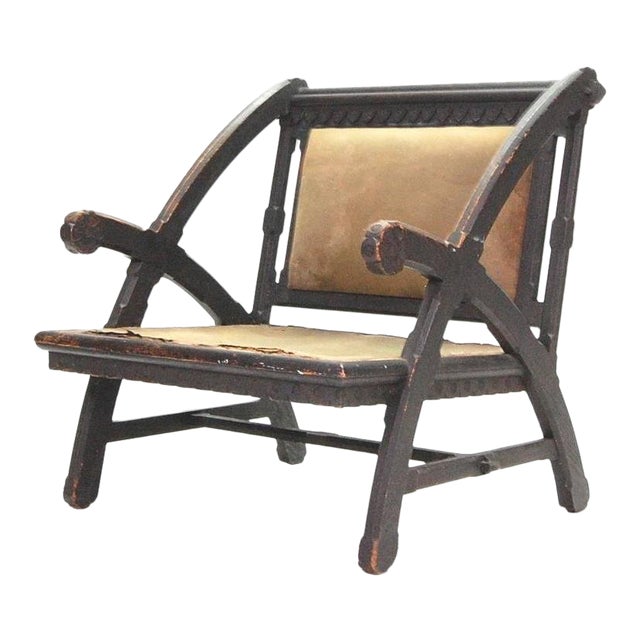 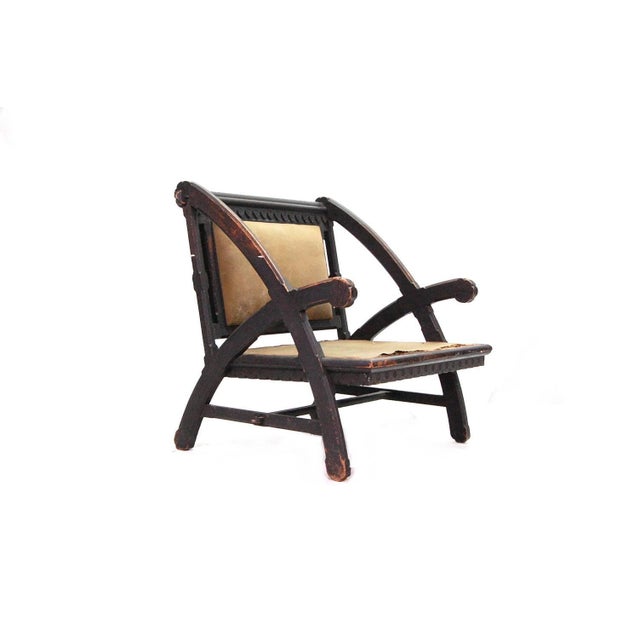 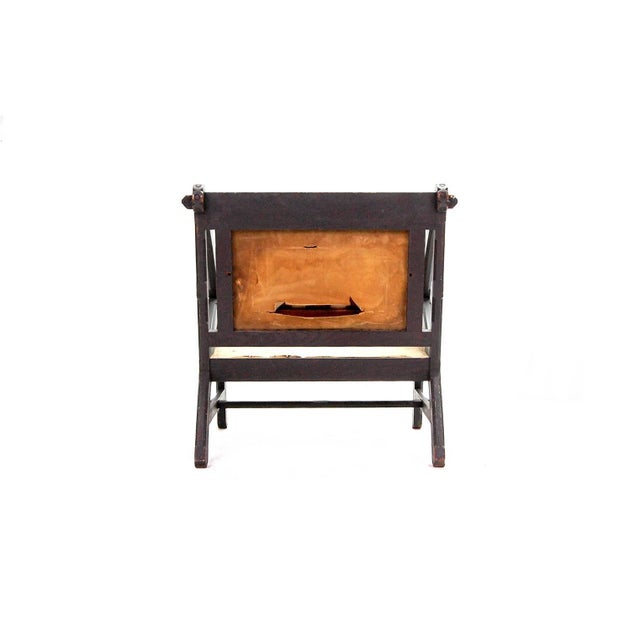 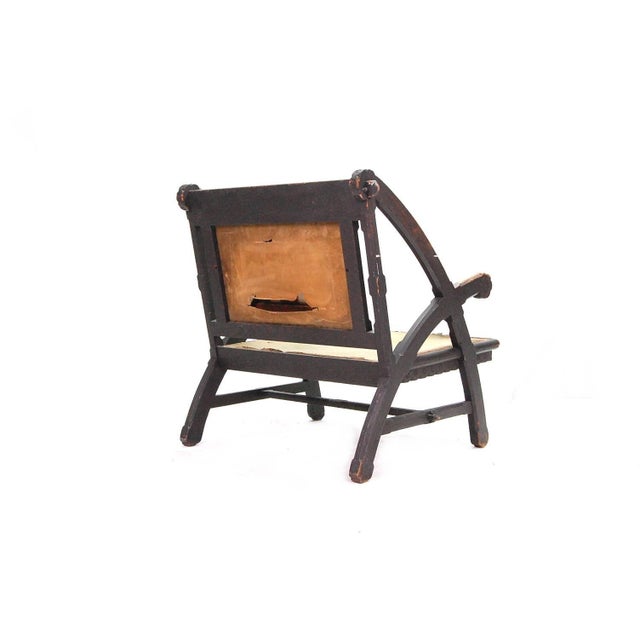 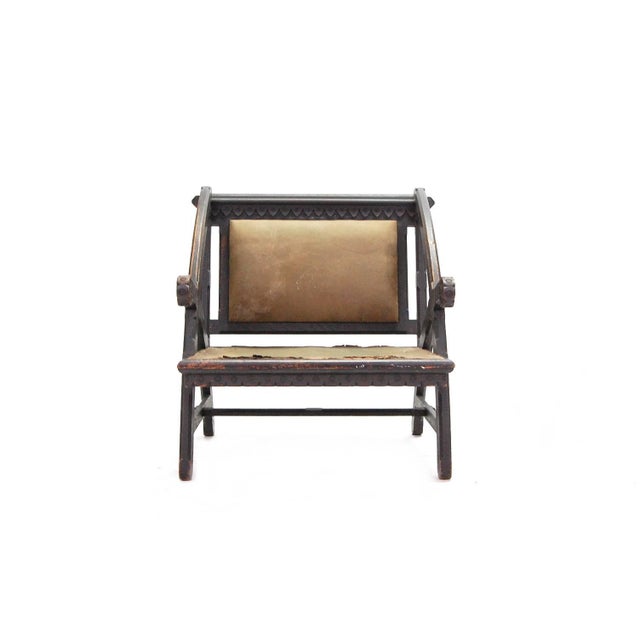 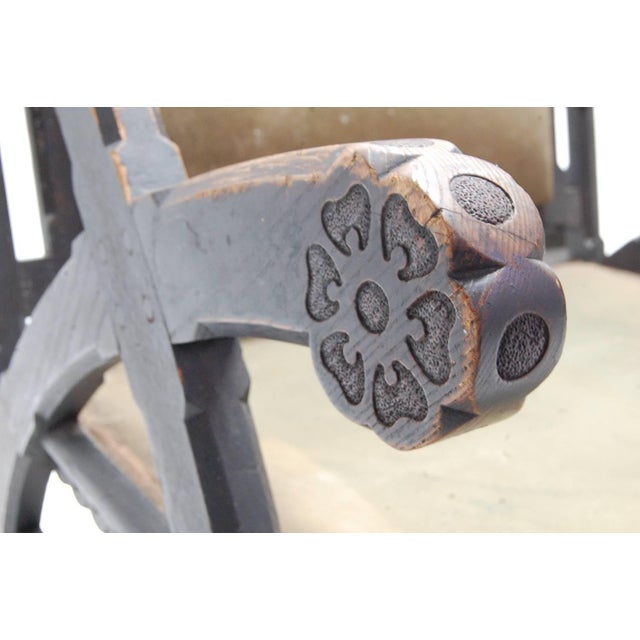 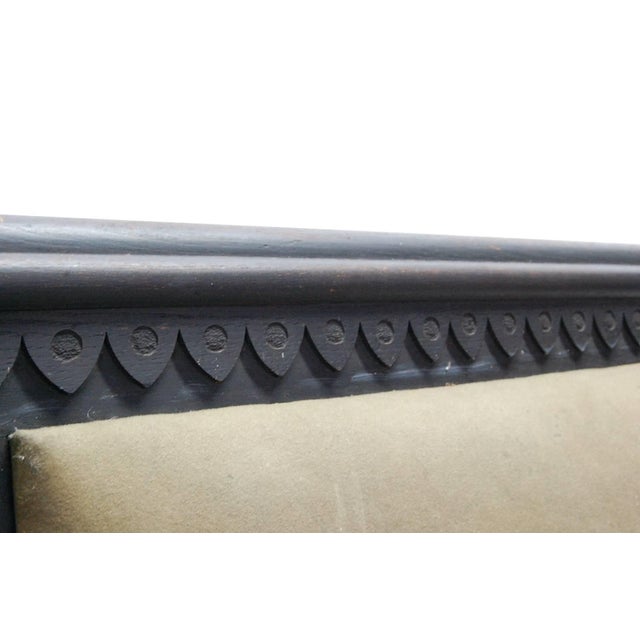 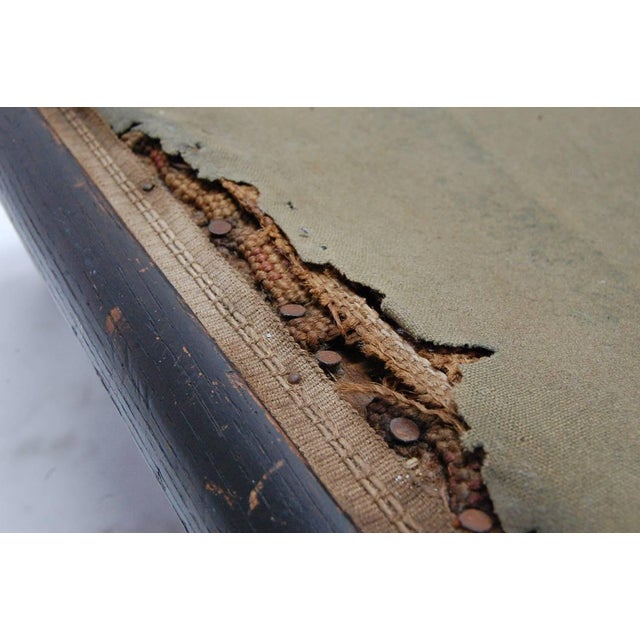 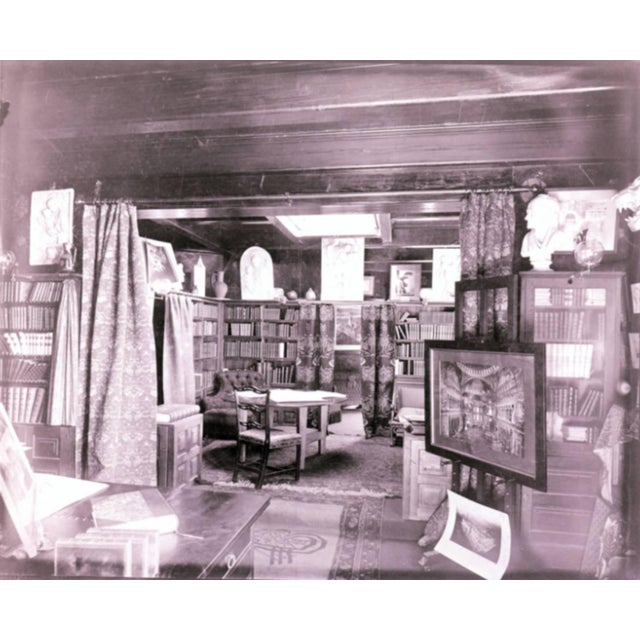 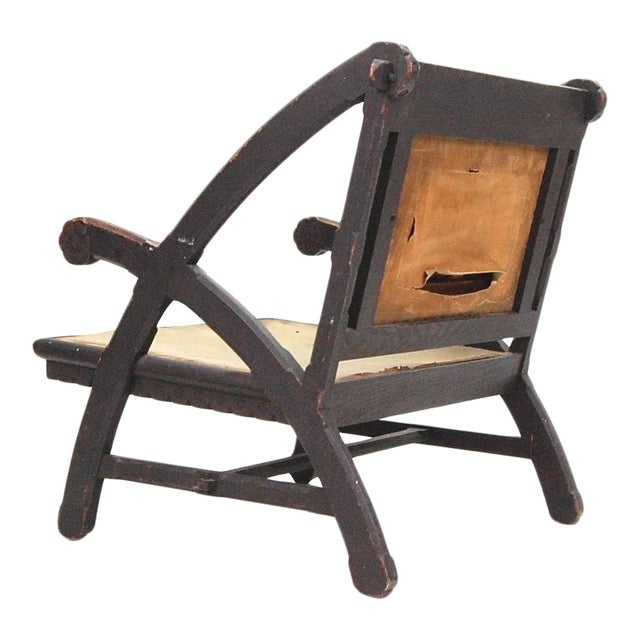 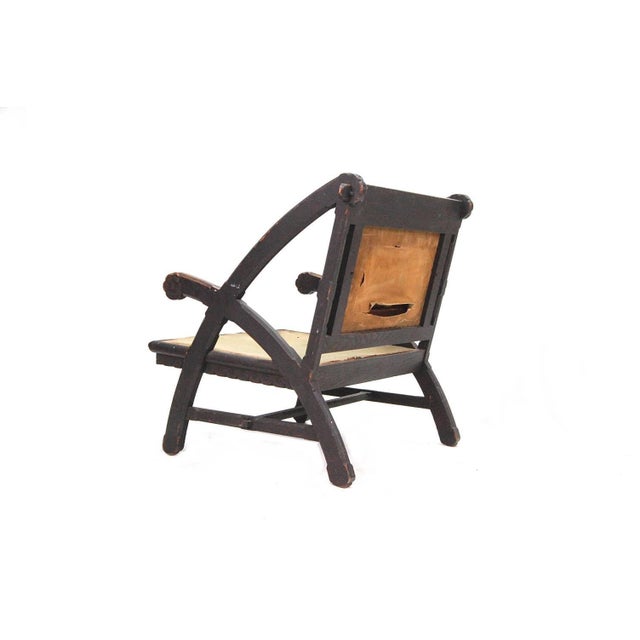 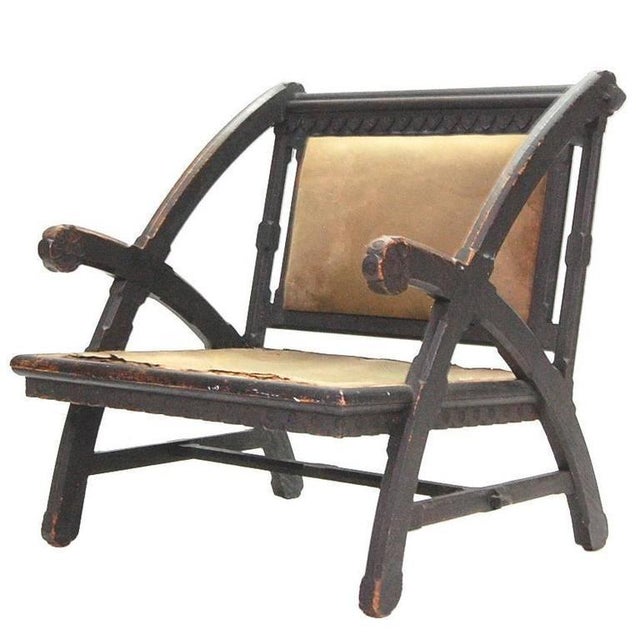 Looking to purchase online? Ask the dealer if it's available.

The following was received from scholar and collector of Romanesque Revival Aesthetic Movement furniture, George Baker, who is working on a book about H. H. Richardson: "Your chair certainly is closely related to the Woburn Library armchairs designed in Richardson's office, but it has subtle deviations that make it of particular interest to me. You see, it is documented Richardson himself retained two examples of this form for use in his private residence in Brookline. The example in a period photo of his parlor is a match to the Woburn Library armchairs and the other, seen in a small book lined chamber off his personal office, has all the deviations present in your example: the pointed rather than scalloped fish scale carving atop the back, the more elaborate chamfering on the vertical stiles, and finally, the stipple carved circles on both ends of the arms and along the bottom of the seat. It cannot be discerned from the photo, but presumably it has the beautiful foliate carving on the side of the arm lacking in the Woburn examples.


While it cannot be proved that your chair is the only example that was ever fabricated, I think it likely that your chair is the very one owned by Richardson himself, and I am delighted to see that it has survived. I do not think your chair was ever actually at the Woburn Library. Interestingly, this is not the only variation on the Woburn arm chair. Two examples of a diminutive version are known to exist. They lack the bottom stretcher as well as the pinned mortise and tenon construction at the sides, and the back has a wood panel rather than upholstery. In common with your chair, the smaller version has the pointed fish scale carving and the stipple carved circles. All three versions are clearly the product of the same workshop, and although Richardson had a successful and productive relationship with A. H. Davenport, no documentation I am aware of has definitively determined that they were the makers of his early furniture.


Why three versions of this chair should exist when it was only utilized in one of Richardson's commissions is a mystery. That the arm chairs at the Woburn Library are all uniform in appearance suggests that the other two versions were early design concepts that were ultimately rejected. Perhaps budgetary restraints dictated that your version be simplified to the one ultimately manufactured. Certainly the removal of the stippled carving and more elaborate stiles would make it less costly. It is a subjective consideration, but I think the additional carving on your version makes it slightly superior to the Woburn examples. Richardson obviously thought of both chairs highly enough to live with and prominently display them in his home.


In the American Wing of the Metropolitan there is a Woburn arm chair on loan from a private collection. Given that the Boston MFA's example has Woburn provenance, perhaps the one at the Met was the other example that Richardson himself owned.

Henry Hobson Richardson (September 29, 1838 – April 27, 1886) was a prominent American architect who designed buildings in Albany, Boston, Buffalo, Chicago, Pittsburgh, Cincinnati, and other cities. The style he popularized is named for him: Richardsonian Romanesque. Along with Louis Sullivan and Frank Lloyd Wright, Richardson is one of "the recognized trinity of American architecture".

Richardson studied at Harvard College and Tulane University. Initially, he was interested in civil engineering, but shifted to architecture, which led him to go to Paris in 1860 to attend the famed École des Beaux Arts in the atelier of Louis-Jules André. He was only the second U.S. citizen to attend the École's architectural division—Richard Morris Hunt was the first—and the school was to play an increasingly important role in training Americans in the following decades.

Per the Museum of Fine Arts Boston website: One of America’s most influential architects of the nineteenth century, Henry Hobson Richardson is best known for his original interpretation of early medieval building styles in modern architecture; he himself described the style as “a free rendering of the French Romanesque.” As an important figure in the design-reform movement of the period, he designed furnishings and interiors integrated with the overall architectural scheme of his libraries, churches, and other public buildings. For the Woburn Public Library (sometimes called Winn Memorial Library) in Woburn, Massachusetts-the first of several public library commissions, constructed from 1876 to 1879-Richardson designed this chair to harmonize with the curved lines of the wooden barrel-vaulted ceiling in the book room and the picturesque, neo-medieval style of the building.

The chair reveals the influence of British architects and design reformers, including Augustus Welby Northmore Pugin, Bruce Talbert, William Morris, and others who advocated a return to the “honest” design principles of medieval furniture. Richardson intended its solid oak frame with chamfered, or angled, edges and deliberately exposed joinery to suggest the sturdy character of medieval furniture so admired by the English reformers. The chair’s curving, crossed members and pared-down structure may be indebted to Gothic-inspired designs by Pugin and Talbert, including X-frame chairs and tables. Nevertheless, Richardson’s chair was an original form, which despite its massive scale is visually lightened by its spare carved ornament and its unusual cantilevered arms.

The MFA has one in their permanent collection, gifted to them by the Woburn Public Library April 12, 1961.

This chair is being offered in "as found" condition. We can assist in finding a conservator to restore this piece for an additional fee, or you can find your own. The chair appears to have never been restored, and does show signs of use, and has very minor loses. The chair does appear to have a very old, and very thin coat of black paint, although it may very well be the original fumed finish. If you would like to view this chair in person, please contact us. We'd be more than happy to arrange a viewing. less 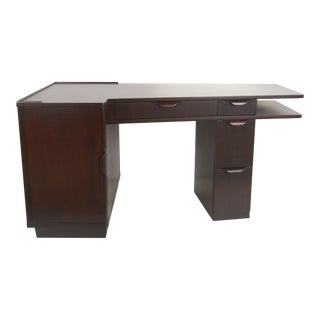 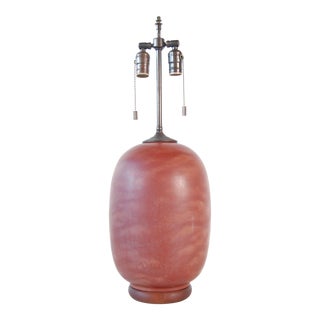 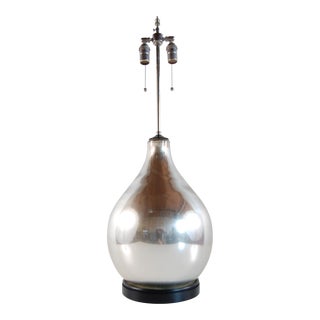 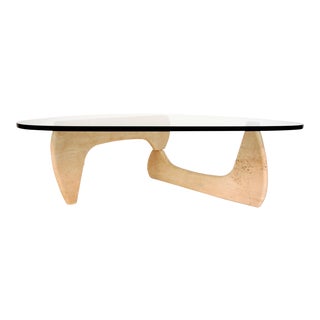