Vladimir Kagan furniture may get a sultrier rap and George Nakashima furniture may fetch higher bids, but there’s no denying that when it comes to Adrian Pearsall’s furniture, the stuff has serious star power. Considered the godfather of Atomic style, Pearsall crafted bold, attention-grabbing chairs, coffee tables, and sofas that married supreme functionality (and materials) with surrealist proportions. Although Pearsall only designed for three decades before trading in furniture design for the high seas (literally), his furniture made an indelible impact on Mid-Century Modernism. Today, Adrian Pearsall furniture stands among the tangible reminders of Mid-Century Modernism’s funkier side—the psychedelic forms, the brain-stimulating colors. Ahead, we delve into Pearsall’s creative influences, his masterpiece designs, and why his furniture might just be the last remaining deal on the Modernist market. 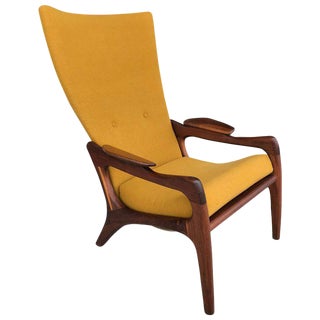 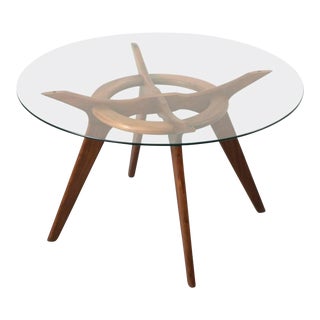 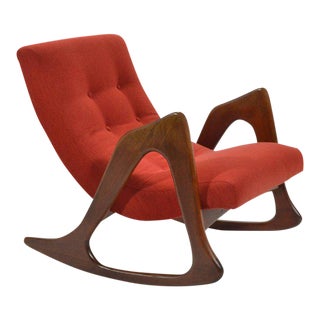 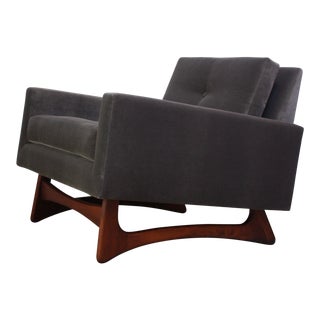 Pearsall was born in Trumansburg, New York in 1925. One of four children, Pearsall was raised primarily by his stepmother. In 1942 at age 17, he met his future wife, Dorie, on a train ride from Ithaca, New York to Wilkes-Barre, Pennsylvania. Having plans to enlist in the U.S. Navy already, Pearsall announced his intent to marry Dorie upon his return.

After completing his tour of duty and obtaining an architectural engineering degree from the University of Illinois, the couple was married in 1950. Soon after the union, Pearsall decided to try his hand at furniture design. From the beginning, the pressure was on for Pearsall’s new venture to take, as Dorie was expecting the couple’s first child. To make it happen, Pearsall joined forces with his brother, Richard, and formed Craft Associates in 1952. With Pearsall on design and his brother on finances, the duo began churning out basic, streamlined furniture from Pearsall’s basement.

In contrast to the heavy, walnut-based pieces that Pearsall is most recognized for today, Craft Associates’ first pieces were constructed primarily of wrought iron. An early Adrian Pearsall sofa, for instance, features a long upholstered bench seat, gently flipped at either end, set atop iron pin legs ending in ball feet. Similarly, an early Pearsall coffee table is constructed of a travertine slab balanced atop thin iron legs. Wrought iron allowed Pearsall to keep Craft Associates furniture cost-effective, a principle that Pearsall remained passionate about throughout his career.

With the help of Dorie, Pearsall peddled his early designs to department stores in neighboring counties and nearby Manhattan. Early clients included Macy’s and Wanamaker’s. 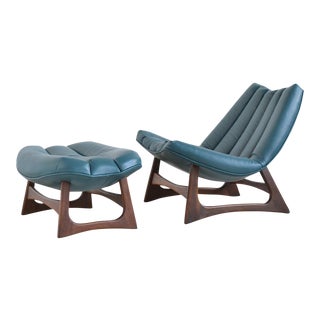 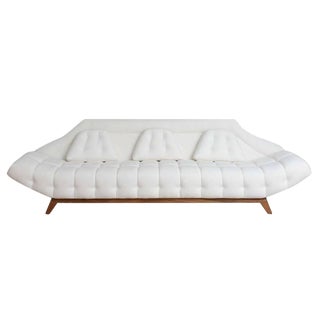 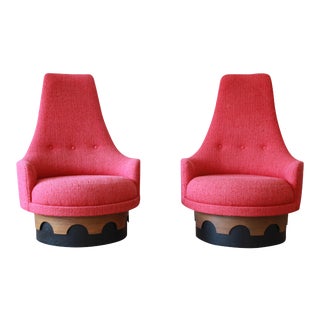 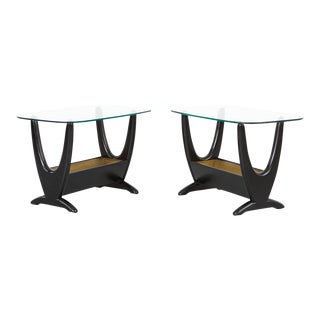 THE ART OF SCULPTING WOOD

As Craft Associate’s client base grew, Pearsall began integrating walnut into his creations. Contrary to modernists like Edward Wormley and Paul McCobb, who typically used wood to construct austere, right angles, Pearsall shaved it into curvaceous, organic shapes. While Pearsall did create a number of sofas and chairs with traditional peg legs, he favored plinth bases for chairs and sofas, which allowed for more sculptural license. Among the earliest Pearsall chairs to integrate walnut was his “Grasshopper Chair,” which featured a reclined, chaise-like seat suspended between two arched “grasshopper” legs made of walnut.

Pearsall coffee tables also followed a similar formula. Walnut was typically used for the base, while another material was used for the top to keep a cap on costs. One popular Pearsall coffee table is composed of an asymmetrical, jack-shaped base made of walnut with a piece of kidney-shaped piece of glass set on top. Unlike the more severe sputnik shapes other designers were playing with at the time, Pearsall’s jack base is more amebic than sharp. Pearsall’s organic take on futuristic shapes brought a holistic sensibility to Mid-Century design that may have previously eluded homeowners who felt it too harsh for their suburban homes. 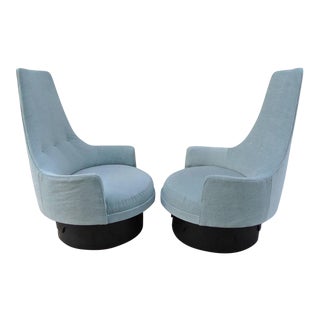 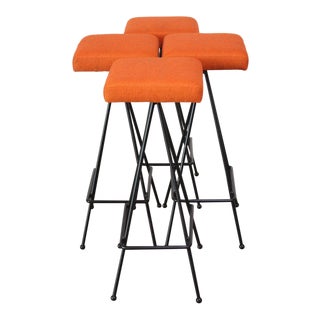 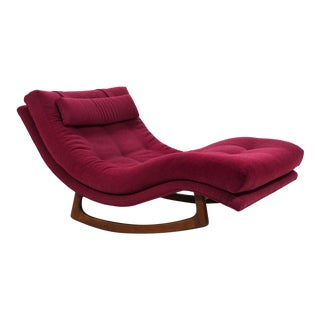 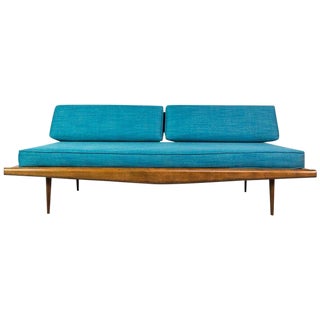 INSPIRATION FROM THE SKY & SEA

In a contemporary context, Pearsall furniture can sometimes feel a touch extrinsic–about as far from mass appeal as you can get. However, in the 1950s and 60s, Craft Associate furniture spoke to common day objects and interests. Most notably among them: the skies and the seas.

Atomic design thrived throughout the Mid-Century, and Pearsall tapped into the public’s star-studded tastes with furniture that felt lifted straight from a spacecraft. His “Throne” chairs, for instance felt like a surreal take on the captain’s chairs you’d find on any traditional aircraft. Featuring tall, towering backs that were either notched or extremely tapered, these chairs spoke to a nation enamored by space exploration. Flared arms, mimicking wings, only added to the theme. Nowadays, it’s not uncommon to find Pearsall dining chairs or accent chairs bearing tags like “Star Trek-style” or “Twilight Zone-style,” both popular shows of the era.

For those who felt that Persall’s spacecraft-inspired skewed a bit too avant-garde, Pearsall also worked a more earth-bound inspiration: boats. Among his greatest pieces to utilize watercraft inspiration? The Gondola Sofa. Featuring a hammock-curved seat, the Gondola sofa sits atop a curved walnut base supported by walnut-sculpted hairpin legs. The seat deck is upholstered, as is the back of the sofa, and both are outfitted with tufted pull-away cushions. Like the watercraft it’s named for, the Gondola sofa features both solid craftsmanship and an unusual dreamlike elegance. 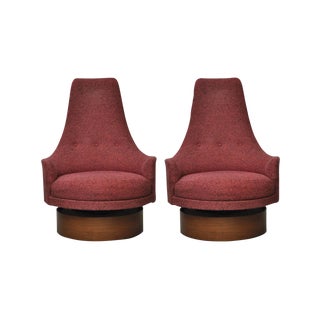 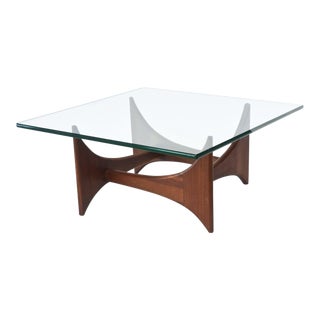 American Modern Pair of Walnut a... 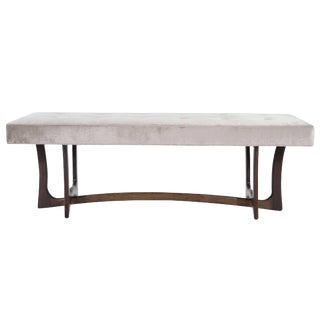 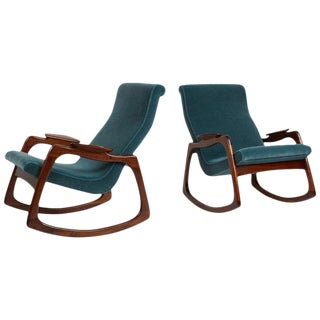 Women’s fashion also heavily influenced Pearsall, especially when it came to selecting fabric for Craft Associates sofas and chairs. Pearsall preferred colorful tweeds and wools over neutrals, with many showcasing the psychedelic-inspired florals and paisley patterns of the day. Plaids and stripes in lime green, orange, and hot pink colorways were all standbys for Pearsall, highlighting his alliance to the cutting-edge trends. It’s also not uncommon to find Pearsall sofas and chairs featuring two-tone fabrics, with seat frames upholstered in a solid fabric and cushions upholstered in a coordinating floral.

In 1969, the Pearsall sold Craft Associates to Lane Furniture Company. Given that Lane had spent the 1960s releasing collections such as Silhouette line (an ode to Oscar Niemeyer’s  City of Brasilia), Craft Associates’ futuristic look was a natural fit for the company. With the ink on the deal dry, Pearsall went on to form Comfort Designs with acquaintance John Graham. In his new venture, Pearsall abandoned his signature use of walnut and focused on more glamorous, padded silhouettes reminiscent of Vladimir Kagan or Milo Baughman. Among the most iconic Comfort Design pieces is an armless kidney bean shaped sofa with a triple-tiered upholstered base. Other powerful designs include a powder puff-style ottoman similar to Karl Springer’s soufflé poufs and a series of pencil reed-covered consoles, side tables, and paneled sofas that many mistakenly attribute to Gabriella Crespi.

Although Pearsall eventually left the design world in the 1970s to pursue a full-time career in yacht restoration, he left a magnificent mark on Mid-Century Modernism. As time continues to wear away the prevalence of atomic style, Adrian Pearsall furniture inches further from the pedestrian and closer to the avant-garde. Where it ultimately lands is anyone’s guess, but one thing for sure: Adrian Pearsall furniture still has momentum. 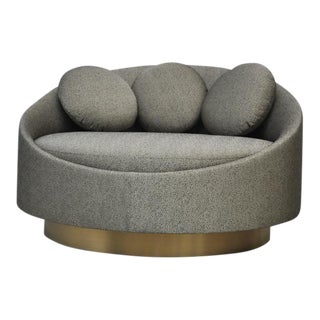 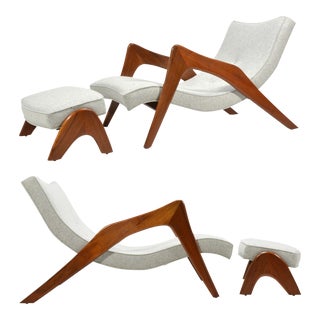 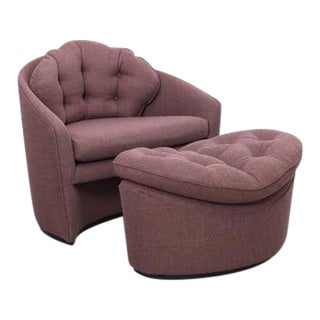 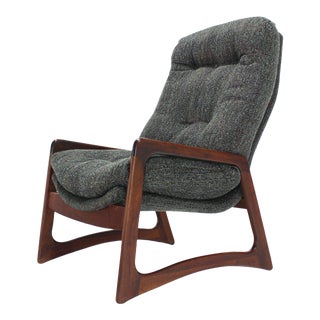